Caring Enough to Make a Difference 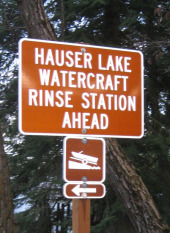 A watercraft rinse station was constructed at the Hauser boat launch in the Spring of 2007.  Funded by an Idaho Department of Agriculture grant, it was the first permanent\stationary watercraft rinse station in Idaho and one of a handful across the country.  Designed and constructed by Coalition volunteers and several local businesses, the rinse station was initially built to prevent the inadvertent spread of Eurasian Water Milfoil, a very invasive and destructive aquatic weed, by boats and jet skis into Hauser Lake.

Eurasian water milfoil is now found in almost every state in the country, threatening the ecology, fishing and recreational use of lakes, as well as the tourist and boating industries.  It spreads quickly and kills off native plants and wildlife.  States have been spending millions of dollars to fight the spread of milfoil but once it establishes itself in a lake, eradication is a very difficult and expensive undertaking.

The watercraft rinse station is very simple to use.  Drivers tow their watercraft into the station, where they can inspect the craft and its traileer and then rinse off any weeds or other debris that have remained on the craft following its last outing. Since its construction, station attendants have been available on weekends and at other busy times to help the boaters perform a complete inspection and rinse off.

The rinse station has served its purpose well to date, as Hauser Lake is one of just two lakes to remain milfoil free in the North Idaho area. Unfortunately, the rinse station’s use has been expanded in the last several years to also prevent the importation of several types of invasive mussels. However, if any sign of mussel infestation is found on watercraft or their trailers following inspection, those items must be steam cleaned at a separate state facility